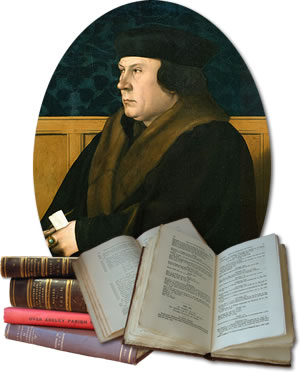 Births, Marriages and Deaths (BMD) have been recorded in England for over 400 years in church parish records and later in civil registers. Picture is of Thomas Cromwell, who in 1539, in the Court of Henry VIII ordered that every baptism, marriage and burial should be recorded. The earliest records, made on paper rather than the parchment used later, have been lost. From 1597 a second copy had to be made and sent to the Bishop.There may be gaps in Parish Registers between 1553 and 1558 when the Catholic Mary Tudor was on the throne, and between 1642 and 1660 during the English Civil War and Commonwealth.

By an act of 1812 baptisms, marriages and burials were entered in seperate, specially printed, books, eight entries per page and including more information. On July 1st  1837 Civil Registration  was introduced. Microfiche copies of BMD (Births, Marriages and Deaths) for Hathern and other local parishes are held in Loughborough Library . Original and microfiche BMD records for the county are held at the Records Office at Wigston and many of these have been transcribed and can be purchased online from Leics Parish Registers . They cover the period from the late C16th to the mid C20th. The following are the BMD records that have so far been obtained or transcribed. Within each document you can use search for name etc. by right clicking and entering the word you want to search for in the Find box.

The following additional information can be found on the Normanton_on_Soar Rootsweb site ,  provided by Lesley Donald in Australia :-

The churchyard has been used for burials from at least the mid  C17th century. It was replaced as a burial place in the early C20th by the current cemetery on The Stints.  Headstones were moved to the perimeter of the churchyard in the 1960s, and members of Hathern Church  and the W.I. have photographed each stone  and transcribed the names and inscriptions thereon. Only a few stones, lying flat, with inscriptions not showing, have yet to be recorded. For cross reference, each headstone has been allocated a stone number. Online you can get  a Headstone index of names which link to a picture of the headstone and the inscription thereon. You can also access the complete list of Headstone inscriptions. In Hathern Church there is a more comprehensive index, a photo of each headstone and maps showing the original and current position in the churchyard. As you would expect the age of death profile for persons in the churchyard  is much different from today as shown in this graph. In early 2015 an exercise by the W.I. to record all details from the Cemetery headstones was completed and these can be seen in Hathern Church. These will eventually be made available online.