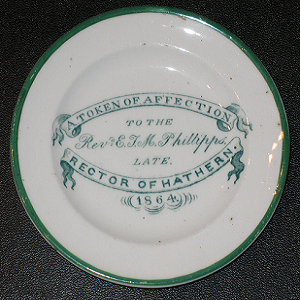 The full text of the sermon preached by Rev. E.T.M. Phillips in 1834 was later printed by D. Cartwright of Swan Street Loughborough, and sold locally and in London. An original text resides in the British Library. This sermon was preached one week after a man in Hathern, who had been drinking, died of a ruptured bowel, after a friendly sparring match with another man. Returns from the sale of the publication were given to the unfortunate man's widow and children. You can read the whole sermon here. This was not the only sermon by the Rev. Phillipps that was published. For example in 1827 Thomas Combe and Son published a 72 page sermon which was "A second letter to the inhabitants of Hathern, Dishley and Thorpe-Acre, in confirmation of Some Assertations Contained in the Former Letter.