The origins of Hathern Co-operative Society

The current owner of the old Hathern Co-op building on the corner of Tanners Lane and Wide Street has in his possession a Conveyance dated Oct 21st 1873 which describes the sale of Messuages, Cottages and Tenements by Loughborough Co-operative Society to Hathern Co-operative Society for 250 pounds. This property was situated on land part of which was used six year later to build the Co-op stores. Maps 1778, 1829 and the 1880s show how the site and buildings evolved. Immediately below is a summary of the sale document :-

Three Messuages, Cottages or Tenements formerly in one situate standing and being formerly in the respective occupations of :-

And also all that Messuage or Tenement recently converted out of two Cottages or Tenements formerly a Framesmith’s Shop occupied by the said Hathern Society for their Provision Stores.

Note added 1977. On June 28th 1977. Acknowledged to be produced to Margaret Mary Griffiths the purchaser of 3,5 and 7 Tanners Lane and part of 1 Tanners Lane.

If you look in the census records on this site you can see many of the families mentioned. For example in 1871, as you would expect, you can see Waring, Randon and Warren families. It would seem from the above document that the cottage converted from two others was the pre-cursor to the Co-op Store opened several years later (see below). 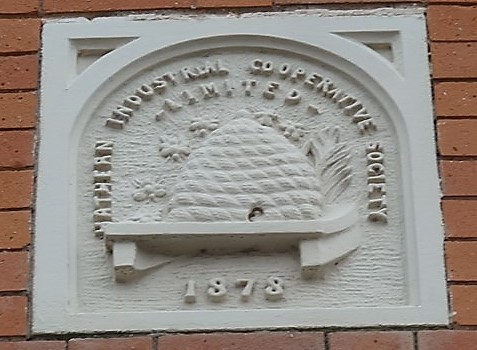 Elsewhere on this site we already have information about the Hathern Industrial Co-operative Society (the Co-op) not least the Hathern in 1881 article which describes the store and bakery as one of the largest buildings in the village. We also have a Savings Pass Book for the Small savings Fund "Established March 1873" originally belonging to Catherine Warren and a Hathern Co-op token worth two shillings. In the news archive on this website you can see quite a few references to the quarterly meetings.These usually state which quarterly meeting it is e.g. the meeting in August 1882 is the 40th quarterly meeting, confirming the Hathern Co-op originated approximately ten years earlier.

The great movement towards reform which included the Co-operative movement and the Temperance Society and had close links to the framework knitters had begun earlier. For example the Loughborough Monitor of November 29th 1866 reported on a major demo in Loughborough for the cause of reform which included the Loughborough Co-operative Society and reformers from surrounding villages including Hathern. The New Co-op Opens With A Bang article describes the building of the new Co-op Store at the end of the 1870s. The large upper room then became the venue for a variety of social events and meetings of framework knitters. Previous meetings of the Co-operative Society had been in the Temperance Hall (that became 'Jim's Garage' in Pasture Lane).