History of the Leys

In the gallery of streets you can see a few photos of The Leys as it was including two uncovered recently. Below is an article by Dave Neville showing how its history goes back to at least the mid C18th and indicating there may have been up to 14 dwellings there at one time.

The Leys is an area of ground behind the Baptist Church off Anchor Lane and is owned by Hathern Parish Council who possess a number of historical documents related to the land. The Leys was formerly a play area but is now being developed as an orchard.

A ley is an area of land given over to grass or clover and the earliest document dates from 1764 when the land, described as the Tenter Ground, was sold to William Swift by Isaac Swift. Before 1764 this must have been a location for tenters. Tenters were originally large wooden frames which were used for making woollen cloth. After a piece of cloth was woven, it still contained oil from the fleece and some dirt. A fuller cleaned the woollen cloth and then had to dry it carefully or the woollen fabric would shrink. To prevent this shrinkage, the fuller would place the wet cloth on a tenter, and leave it to dry outdoors. The lengths of wet cloth were stretched on the tenter using tenterhooks (hooked nails driven through the wood) all around the perimeter of the frame to which the cloth's edges were fixed, so that as it dried the cloth would retain its shape and size. In some areas, entire tenter-fields, larger open spaces full of tenters, were once common.

The dimensions of the ground are given as 48 yards x 12 yards, in later documents it is described as being of one rood (1210 square yards) and equates to the current Leys area plus the Baptist Church. In 1782 it was sold by William Swift and George Bennett to William Spencer, and in 1837 it was sold by Elizabeth Spencer (widow of William Spencer) to George Monk. George Monk sold the land to Joseph Coddington in 1839.

Joseph Coddington ran a bakery in Wide Street until his death in 1877. Joseph gave part of The Leys to build the first Baptist Church in 1840. The church was rebuilt in 1880, and has a foundation stone laid by Miss (Annie) Coddington in memory of her grandfather.

The ownership of this land and the three cottages on it passed to Laura Wakefield, the granddaughter of Joseph Coddington. Miss Wakefield operated a general dealers shop from her cottage at the A6 end of The Leys. In 1967 closing orders were made on the cottages on the basis that they were unfit for habitation. In 1969 Miss Wakefield applied for planning permission to build on the land and this was refused mainly on highway grounds. Miss Wakefield then asked Loughborough Corporation to buy the land from her, which it did. The land passed to the ownership of Charnwood Borough Council in 1972 and then to Hathern Parish Council in 1983.

The Leys has two yew trees, one of which is in the church grounds. Although it’s hard to be precise, it is likely that these are around 250 years old and so date from the earliest record. There used to be a third tree close to the church, but this had to be removed.

Cottage and Half of Leys

In 1799 this was sold by Jervis Walker to John Peberdy and David Walker and later in 1799 David Walker sold his share to John Peberdy. In 1863 it was sold by John Peberdy and William Peberdy to Joseph Coddington. In 1863 the property was described as messuage cottage or tenement, blacksmiths shop, garden outbuildings and premises, south west bounded by turnpike road, north west by road leading into the village called Lees Road, north east and south east by land property of Elizabeth Lowes (?) Smith.

The only piece of land which fits this description is 106 Loughborough Road and the land immediately behind, ie to the left of the Leys when approaching the A6, not part of the current Leys land. This was the property (no.3 The Leys) referred to in the census.

Joseph Coddington bequeathed to his son George and his descendants

On 15/10/1934 Laura is named as the beneficiary of her father’s estate. This refers to six freehold cottages in The Leys, five leased to Collins, Gold, Almond, Jessop, Miller, the sixth being occupied by Laura. Three of these were on The Leys (Tenter Ground), not clear where the other three were, although one must have been no.3 (see census return)

What may have happened here was that

John was a framework knitter in silk

Laura was an apprentice dressmaker

John was a framework knitter at home

Laura was a dressmaker

Eugenie was a maker of silk ties

Number of Dwellings on The Leys

1848 PO Directory of Leics and Rutland

1849 Hagar Commercial Directory of the County of Leics

1855 PO Directory of Leics and Rutland

1863 White’s Directory of Leics and Rutland

1870 Harrods Directory of Leics and Rutland

No Coddingtons listed after this date in directories

In 2010, a 12 inch 8 day fusee wall mounted clock was offered for sale on ebay which had the name Wm. Coddington, Hathern on the dial. There is no record of a William Coddington in the records. Advice from a clock expert was that the dial had been re-enamelled 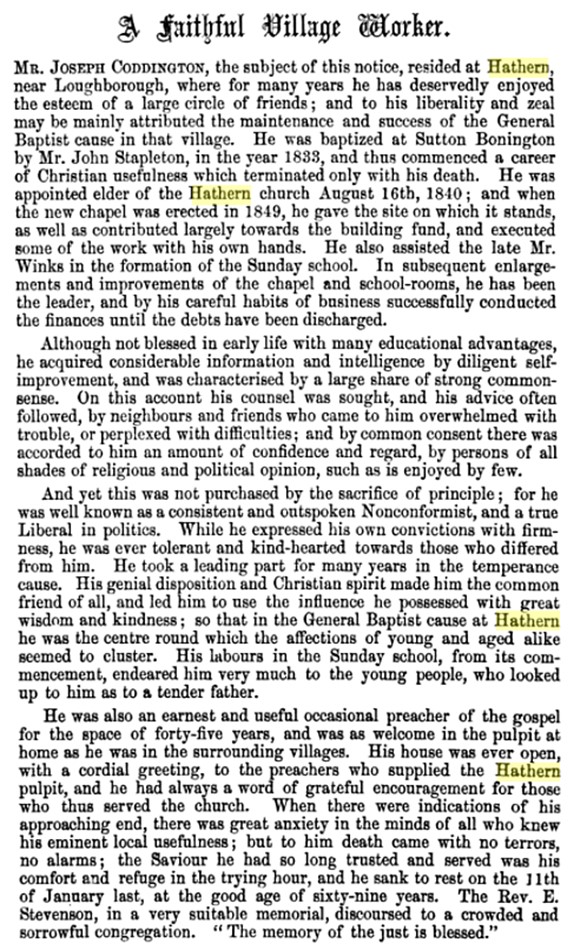 In another article on this site Protestant nonconformity in Hathern you can see that a congregation of 13 Baptists met in Hathern in 1829 and a Baptist chapel is noted in White's Directory of 1846 (possibly it suggests on the site of the 1849 chapel). On the 1824 Rates Map there is a house and garden on plot 12 (the site of the eventual chapel) owned  by John Bennet with resident John Lowesby. On the enclosure map of 1778 plots 98 and 99 on the Leys are owned by George Bennett (mentioned above) and Susanna Bennett respectively. On the waymarking.com website it states that 'The original building Baptist Chapel of 1840 was rebuilt in 1880 as the 2 story accommodation present today'. In the British newspaper archive the very first reference to Baptists in Hathern is on August 28th 1840 in the Nottingham Review as follows :-

'Lord’s-day, Aug. 23d, two sermons were preached in the General Baptist chapel, Hathern, by the Rev. J. Stapleton, of Sheepshead. The chapel was crowded, and displayed the greatest possible order and attention throughout, much pleased with the sincere and urgent manner of Mr. Stapleton's address, which for solemnity and vigour we conceive could not have been more appropriate. His evening address was chiefly to the teachers, and abounded in goodly encouragement and exhortation. His treatment of parental duty was such as to chain the attention of all, and acknowledged by their liberal contributions in aid of the existing school, which hope will continue to flourish'