The following is a picture of a meeting in Loughborough Market Place on July 1st 1917 organised by the Hathern Branch of the Workers Union. This was  in support of the workers at Hathern Brick and Terracotta who were in dispute and locked out. The bitter arguments rumbled on for many months. Amongst the accusations thrown at management (strongly denied) were that they were using the opportunity to replace men with women workers and that when the firm were pressed to release men for military service they selected prominent trade unionists. 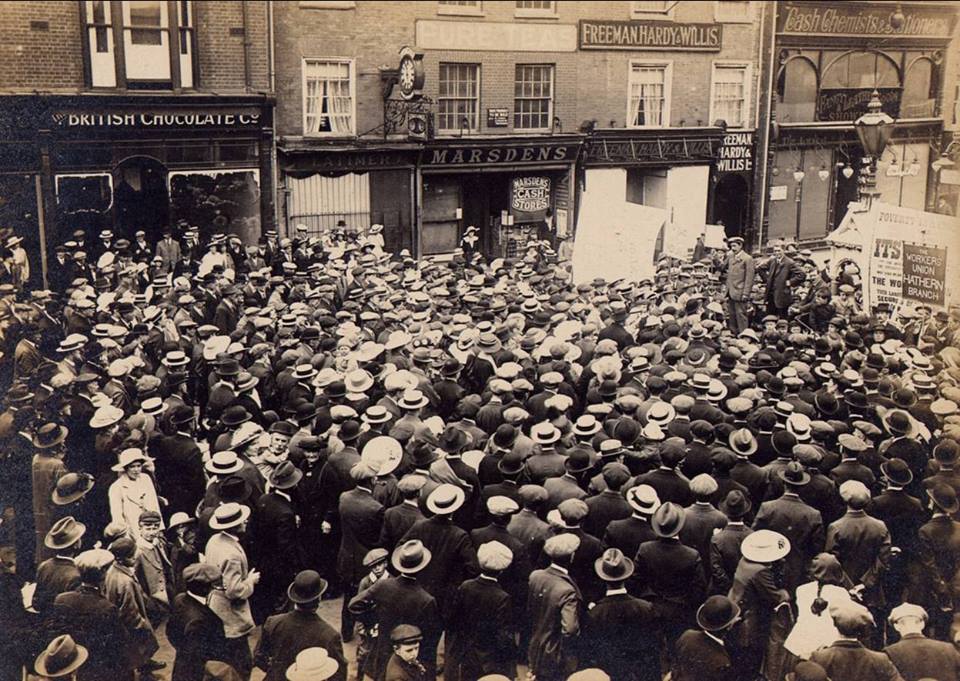 Mike Shuker, a labour historian from Loughborough has compiled the following sequence of events (only the 2 items from the Nottingham Evening Post can be seen in the Newspaper Archive elsewhere on this site).

Strike – wage increase sought and Union organisation had ‘caused friction’. Approx 60 had been out for more than a month, holding ‘large and enthusiastic’ meetings.
LH, 28 June 1917, p8.

6 weeks in to the strike, band led the parade in Hathern. Sympathy for the strikers and a ‘substantial sum’ raised.
LH, 12 July 1917, p8.

Nearly 12 weeks in (meeting 17th August). Speakers : A Dalgarno, Sid Taylor (Workers’ Union Organiser, Leicester), Charles Duncan, MP (Barrow in Furness) – Gen Sec WU. Duncan “... had been connected with the work of unions for 30 years, but had never been connected with a strike where the men were more justified in their action than at Hathern.” Mr Marson gave vote of thanks.
LH, 23 August 1917, p8.

Report of General Munitions Tribunal into the dispute. Agreement that the charges against the company would be withdrawn. Question of whether company were justified in sacking the four men would be examined by an arbitrator
Nottingham Evening Post 7 Sept 1917

Late November, 8 workers given a week’s notice. The Union reported the Works to the Ministry of Munitions.
LH, 29 November 1917, p4.

Dalgarno and Taylor addressed a mass meeting of engineers in Loughborough. Resolution included “Failing cancellation of the notices served out to eight trades unionists this meeting will not be responsible for the ensuing consequences.”
LH, 6 December 1917, p6.

A week later, arbitration at Loughborough found the eight had been dismissed due to a downturn in work – not victimisation. In Hathern, at the Charity Hall, the ILP held a well attended meeting and took steps to form a local branch.
LH, 13 December 1917, p4.
Nottingham Evening Post 12 December 1917

It can be seen from the above that Hathern Bands took part in some of the processions and an indirect result was the merging of the 2 bands as described in the extract below from Hathern Band's website.

In spite of their differences, the two bands amalgamated in mid 1917. This, apparently, was as a result of a strike at the Hathern Brick and Terra Cotta Co. (the Brickyard), which started in May 1917 as a result of the dismissal of four organisers of the Workers’ Union. A band was required to lead processions in support of the strikers. However, because of the demands of the war, neither band could muster a sufficient number of players and they consequently amalgamated. They became the Hathern United Prize Band. Tom Miller (jnr.) was conductor and Jimmy Fisher was bandmaster and principal cornet. Jimmy Fisher had been a prominent member of the Old Prize Band and can be seen in the 1903 photograph. The band practised at the Liberal Club. In the following months there were many parades and concerts given by the band both in aid of the war effort and also in support of the Brickyard strikers and their families.

Dave neville has recently updated the material he put together for a presentation on the terracotta workers strike in 1917. Presentation text. Presentation pictures.