Richard Hartshorne (sometimes Hartshorn) was born in Hathern in 1641 to William Hartshorn, a husbandman and Katherine. Richard, a Quaker, was educated as a lawyer and emigrated to the Rhode Island Colony c1669.He married Margaret Carr, daughter of Monmouth patentee,  on April 27, 1670, in Newport, Rhode Island. The newlyweds received a partially fenced piece of land from Margaret’s father, Robert, upon which Richard had a house built. In1671 the first of their eleven children was born and now in 2018 eleven generations later the Hartshorne name continues.

In England Richard had been a personal friend of George Fox (the founder of the Quaker movement who had visited America) and entertained him at Shrewsbury (USA), as described later by Fox in his journals. He was asked by William Penn and others to survey for Quaker settlements along the Delaware in 1676.Below is supposed picture of George Fox. 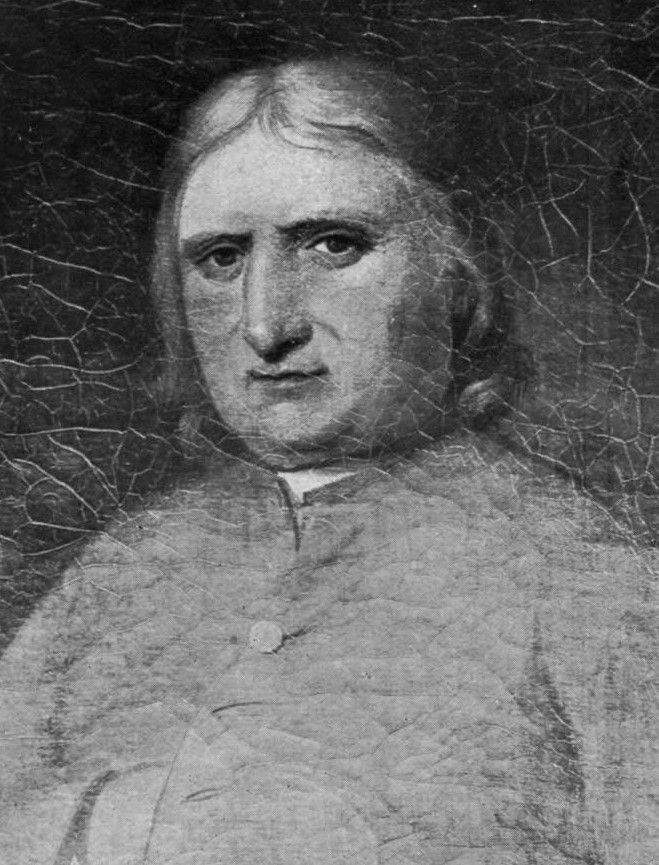 Shortly after the Dutch surrender of the New Netherland Colony to the English in 1664 a large tract of land known as the Navesink Patent or Monmouth Tract was granted to Quaker settlers from Long Island, Rhode Island and Massachusetts, which soon thereafter became the townships of Middletown and Shrewsbury. By 1674 Richard and Margaret had left Rhode Island for New Jersey, where Richard purchased land along the river and bay at present-day Navesink from Vowavapon and Tocus, chieftains of the Lenape. 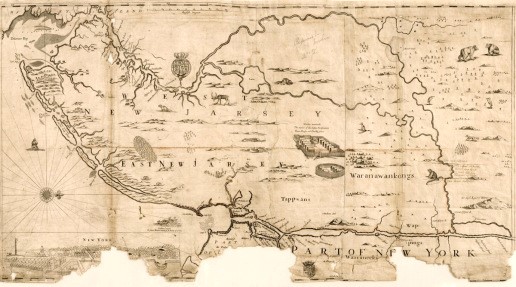 In 1677 Richard believed he had purchased present-day Sandy Hook from the Lenape, although there ensued a dispute about whether the Lenape intended to sell the land or just the fishing rights. “The Indians came to my house,” wrote Richard in 1678, “and laid their hands on the post and frame of the house and said the house was theirs, that they had never had anything for it and they told me if I would not buy the land I must be gone…. They at last told me that they would kill my cattle and burn my hay if I would not buy the land or be gone. Then I went to the Patentee office; they told me that it was never bought nor had the Indians anything for it.” Richard negotiated a settlement with the Lenape on August 8, 1678, in the amount of thirteen shillings for full title to the land. below is the original “Indian” Deed to Richard Hartshorne, dated 1698 and a picture of the Hartshorne homestead in Sandy Hook. The deed  revoked the right of the Lenape Indians’ right to access Sandy Hook. When Richard Hartshorne originally purchased the land, the Indians were permitted access to the land. However, Hartshorne had complained about their dogs killing his sheep and other unwarranted liberties on his lands such as fishing and hunting.  For the cost of ten shillings, Rowavapon sold Richard Hartshorne “all the liberty of pluming on Sandy Hook, hunting fishing and fowling, getting cannowes upon Sandy Hook or any part of the lands of the new sands.” The document is signed with with mark of Tocus in the lower left corner, and the animistic figure mark of Rowavapon in the lower right. The wax seal is no longer legible. 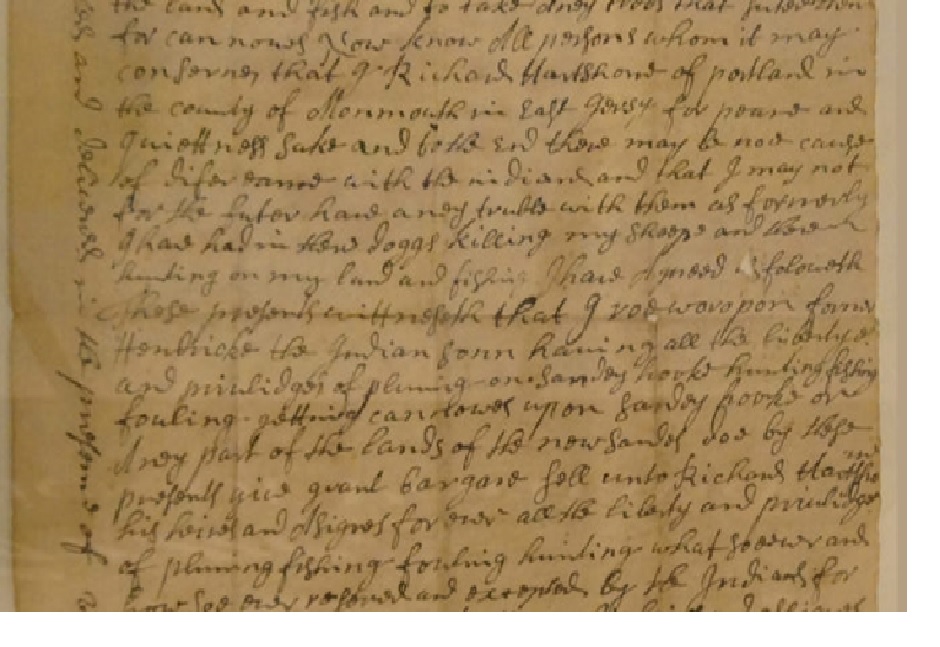 The painting below depicts William Penn entering into peace treaty in 1683 with Tamanend, a chief of the Lenape ("Delaware Indians") Turtle Clan, under the shade of an elm tree near the village of Shackamaxon. 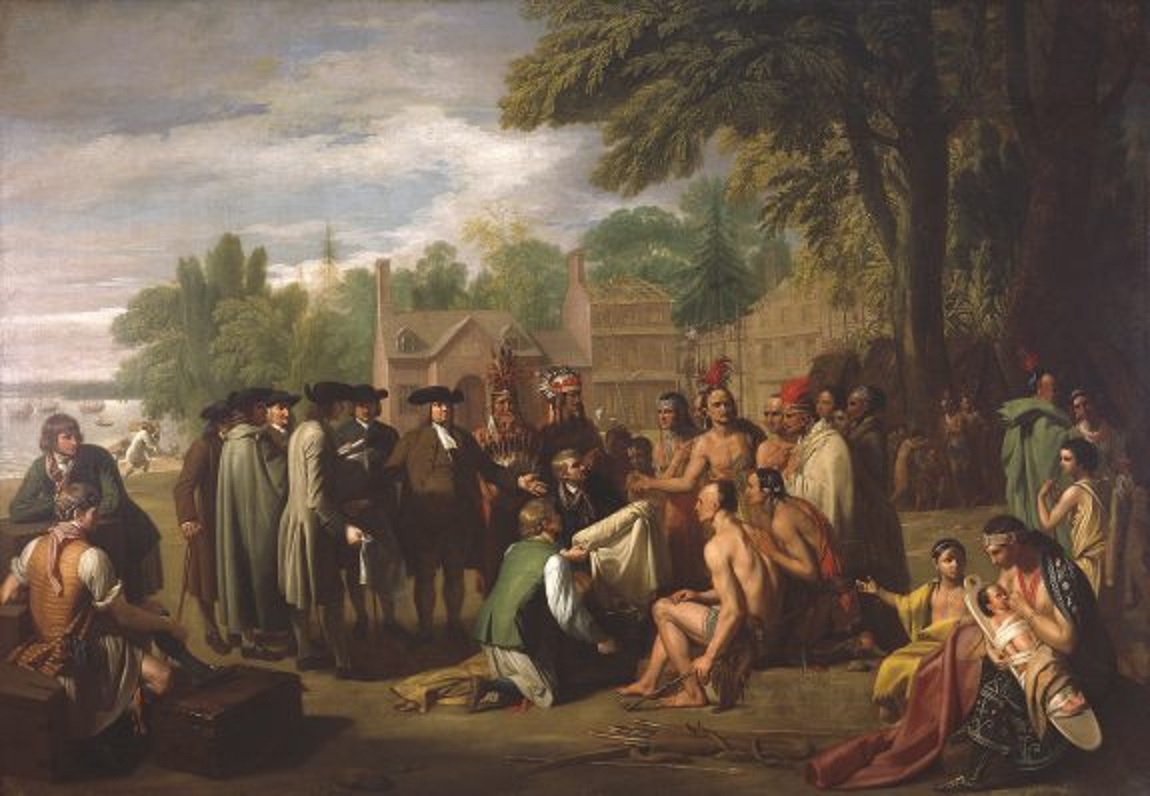 Interesting link "The founding of the Quaker colony of West Jersey"

A worthy career in local government

Richard held the office of town clerk of Middletown, New Jersey, was appointed a Justice in 1684 and elected a member of the Provincial Assembly in 1685. He held the position of Speaker of the Assembly from 1686 to 1693 and again from 1696 to 1698. Richard was also nominated for the office of High Sheriff of Monmouth County, a position he declined.

Said to have been "a man of good reputation and benevolent disposition", he was a steadying and conciliatory influence during the years of constant upheaval between the settlers and Proprietors, as an influential spokesman for the conservative wing of the Anti-Proprietary group, and later in disagreements with the Royal Governor, Lord Cornbury.

Message to family and legacy to the poor

In 1704 Richard made a record of his marriage and the dates of birth of his children. He wrote instructions to his children on serving God, caring for their mother and the necessity of government while on earth.Margaret died c1719. Richard wrote a will on May 14, 1722, in which he designated a legacy for the poor. Richard died shortly thereafter, on May 22, 1722.Not owing 5 shillings to any man or woman, Richard Hartshorne was buried next to his wife in the Hartshorne Burying Ground, on the north side of the highway in Middletown Village.

ADVICE TO MY CHILDREN

“My children- What I now write to you is to speak when I can not therefore I charge you all to mind what I say. I expect you all to serve God with an upright heart, for if your heart is not upright toward God all your service & worship are vain- I desire you all in an humble frame of spirit to mind- hearken to the Spirit of God in every one of your consciences & as you yield obedience to that & there abide, your heart will be upright in the sight of God & so your worship will be acceptable. Pray that God will give you a true faith in Him, be sure you avoid vain janglings & controversies about religion. Be sober in all communities & if they suit you not keep away & make no scoff nor flout at any especially in their religious worship; nor go because it only pleases this or the other man but because it is well pleasing to God- Be sure all of you to be dutiful to your mother & show her that obedience due to a good mother for such she has been to you & see that you are all loving & kind one to another as brothers & sisters ought to be. I charge all of you not to be lofty but endeavor to serve each according to your ability- And be not hot but slow in taking offence & slower in giving. And be courteous to all, shutting not your door against a stranger but showing hospitality by setting him on his way- And my sons, for as much as there is a necessity for government while we are all upon earth, for the well ordering affairs in the world see that you endeavor as far as you can to choose good men & be not wanting to support them according to your ability & guard against ambition of rule or office- And now my children I commit you to God Almighty, who is a Father to the fatherless, who truly fear Him & take my leave- farewell, farewell. 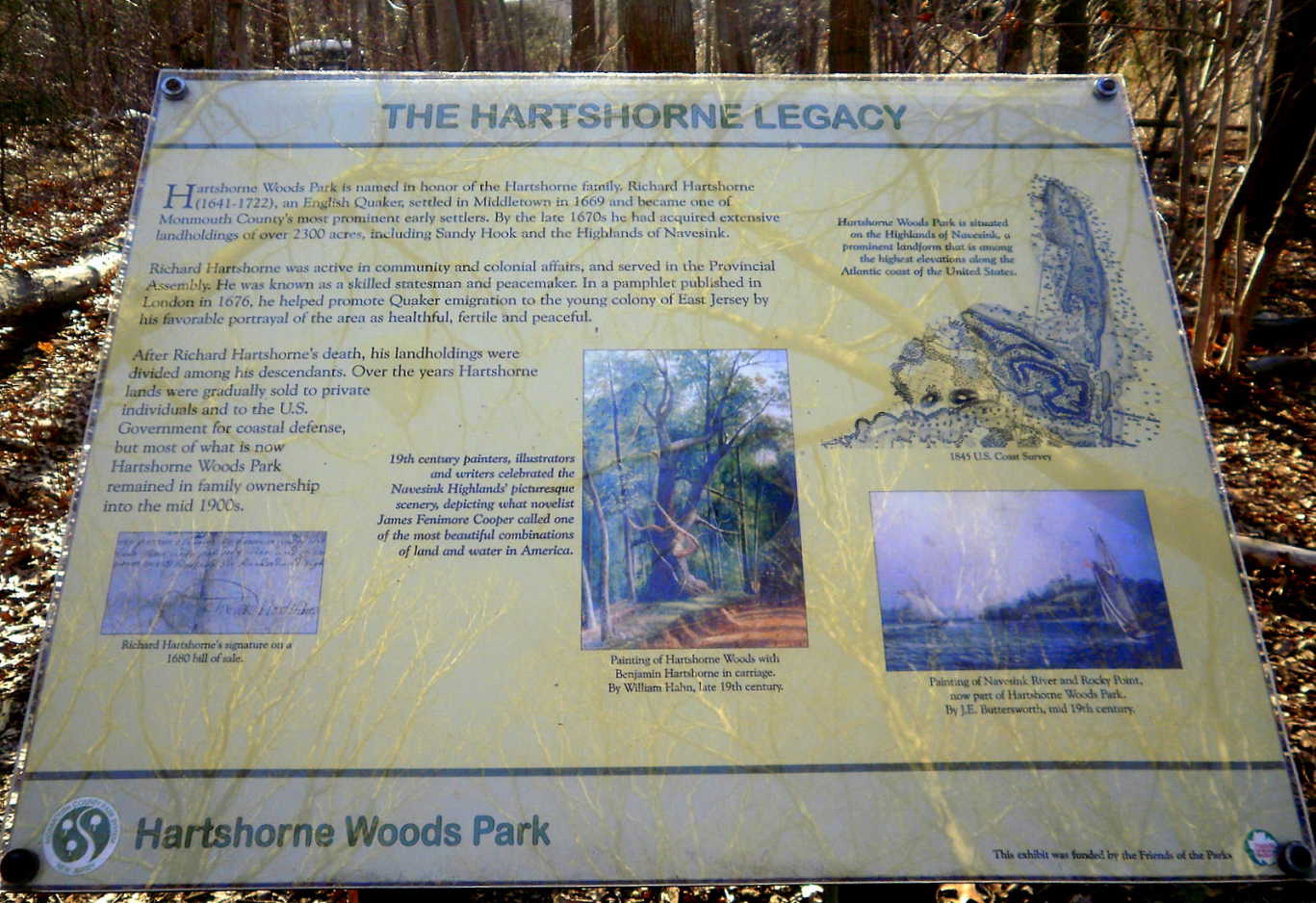 There are numerous references to Richard on the web. The following is from Ancestry.

The progenitor of the family in Monmouth County was Richard Hartshorne (1641 - 1722), a lawyer from Hathern, Leicestershire, England who immigrated to Middletown Township in 1669. Richard's brother, Hugh, was one of the New Jersey Proprietors. Richard, active in community and colonial affairs, had extensive land holdings in Middletown Township including all of Sandy Hook. He settled first at Weikec, then built a house on the Navesink Highlands called Portland, and finally built a house in Middletown. Much of this property was retained by his decendants. On November 27, 1670, he married Margaret Carr of Newport, Rhode Island. They had eleven children: Robert, Hugh (1), Thomas, Mary, William, Richard (1), Katherine, Hugh (2), Sarah, Richard (2), and Mercy.The Hartshorne Family Papers document one of the earliest Monmouth County families and will be of interest to genealogists and social historians. The collection records the domestic activitites of the family estate "Portland", family finances, activities and relationships