How times have changes. Sam Price in 1950

Sam Price was 81 years old when this article was written in 1950. First hand reports from his father were of the Rev Phillipps (good) and Rev Smythies (bad). 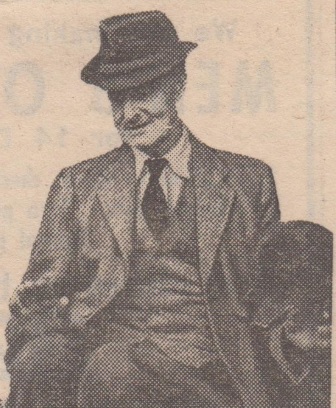 Sam recalls the hosiery industry at the turn of the century at which he is an acknowledged expert. Social highlights remembered fondly are Wakes week and  Co-op tea parties. Sam was an accomplished chorister and he makes interesting comments on the reasons why Hathern was such a hotbed of cricket.

AN OPEN QUESTION. His dad paid threepence a week for Sam's schooling. Sam's treat was to spend a halfpenny in Ann Seal's sweet shop.

WICKED HATHERN. Yet Book Hawking Society sold more books in Hathern than any other comparable village

"BEHOLD THY KING COMETH". Sam remembers the infamous Rev Smythies and his description of his opponents as "unclean beasts".

"TEARS TO THEIR EYES". Sam was a Wesleyan - "the strongest  chapel in Hathern". Meomories include John Adcock an inspirational preacher and local worthy and Tom Warden with his short-stemmed pipe.

PUZZLED. Why do all gravestones of whatever denomination speak of "angelic deeds" ?

THE WILD BEAST SHOW. Sam remembers first job as schoolboy winding for his father. One one day he skipped work to follow travelling show to Kegworth. His mum had 8 kids and spent hours "footing". On Saturday after cleaning the house, she walked to Kegworth to buy things for the week ahead.

STOCKINGERS. Every villager had a stockingers shop and income of 30 shilling per week was split up amongst the family. Sam Harriman was a bag hosier who sold out to Ben Fuller and on Monday mornings stockingers went to top of Narrow Lane to decide who should fetch work first. Ben's son Fred developed the Griswold industry with links to Morley's of Nottingham.

AN EXPERT. Sam is still called upon to advise on hosiery.

SOCKS FOR THE GENERAL. Frames were also used to make things like collars. Orders included socks for General Burns-Murdoch of Normanton and silk stockings for Lady Murdoch.

RING-TOR. The men played this on Shrove Tuesday whilst the women played shuttlecock and battledore.

THE WAKES. Nobody worked in Wakes Week. 2 clubs paraded ceremoniously - The Hathern Old Sick Club and The Foresters.

PARADES. In Wakes Week there was the Co-op tea party on Saturday and on Wednesday all the Sunday Schools paraded the "wide" and "narrow" lanes, headed by the band, and on Sunday the Sunday School pupils sang together in a big tent.

EVENING DANCES. These and all jollifications were held in a field in the middle of the village.

STOLE HIS DUCKS. Barsby was the police constable. Someone stole his 2 ducks. The village had no doctor of its own.

THE PUBS. John Cooper at the Anchor used to brew his own beer and women called there for a pennyworth of balm. Now people go to pubs for pints. 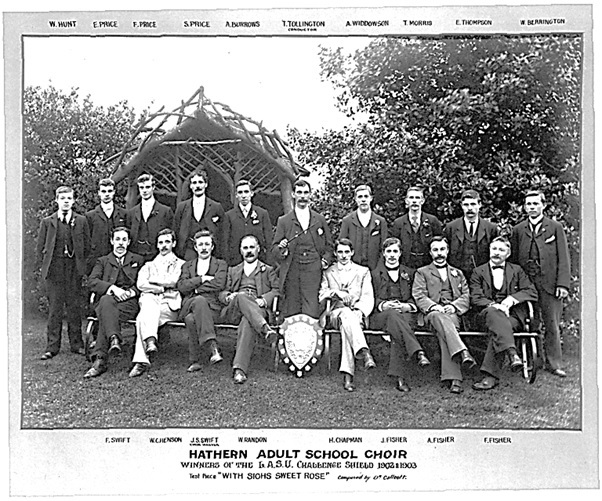 THE BATTLE OF SONGS etc. . Sam recalls famous contest between him and seasoned veteran from Quorn in village pubs with no piano. It was held over several nights and introduced Hathern folk to some songs from outside Leicestershire.

CRICKET PITCH etc. Sam states that cricket pitch is over 100 years old and village is noted for cricket and football, especially the former because of the famous Randons.

DEFYING THE CENTURIES. Sam remembers when "the village constable knew the owner of every footfall after sunset. be he drunk or sober".