The Hattons : farmers and cattle dealers 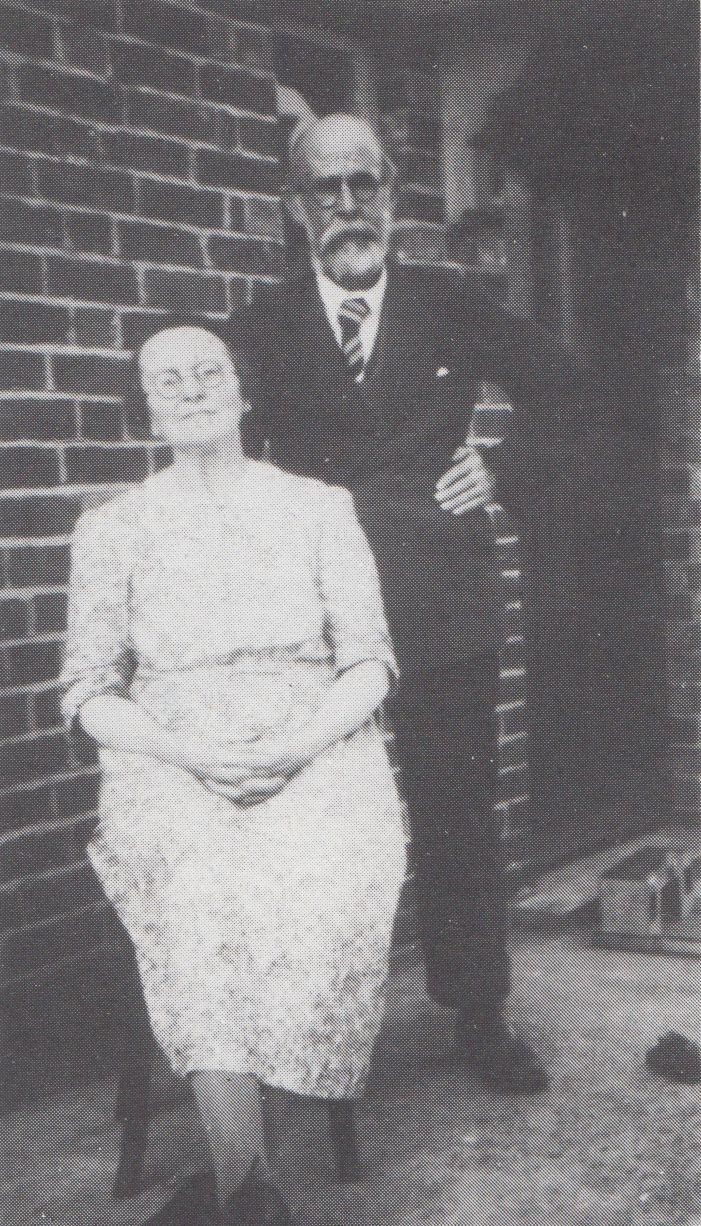 In the gallery of personal photos you can see this picture of George Percy Hatton  with his wife Alice in the 1920s. George was reputed to be a noted naturalist and herbalist.  For over 100 years the Hatton family had been part of the farming community in Hathern. The family's connection to Hathern started with two brothers, the sons of Thomas Hatton had married Elizabeth Laban 1793 in Melbourne Derbyshire. The brothers ended up in Hathern -  William Hatton married Sarah Marshall from nearby Zouch Mills and George Henry Hatton married Elizabeth Braley from Hathern.

The elder brother by sixteen years was William Hatton born in 1795. Earliest reference in Hathern is 1832 when two people were imprisoned for stealing his wheat. He married Sarah in Normanton in 1835 and for a few years they raised their four children in Hathern. During that time he was three times mentioned in court actions where local people were charged with stealing wheat and livestock. In 1840 seven closes of land occupied by William were advertised for sale, these being at the back of a farmhouse and barn near the church. 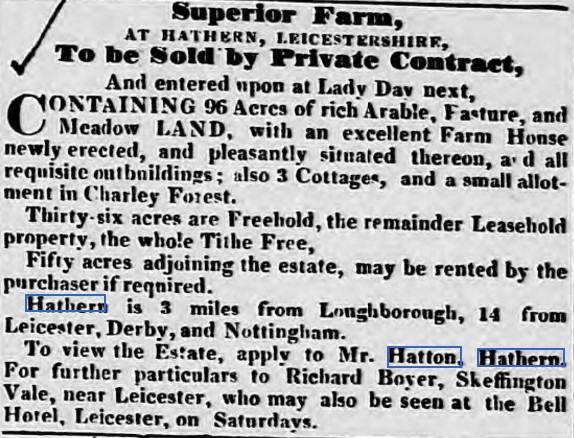 In the 1841 census he is shown with his family (and three servants) in the Hathern North census but no specific address is shown but it possibly Dovecote Street. It seems that William maybe farmed for landowner Richard Boyer as William is mentioned as contact on this 1834 sale of a superior farm and the  1835 notice of farmhouse etc. to be let. 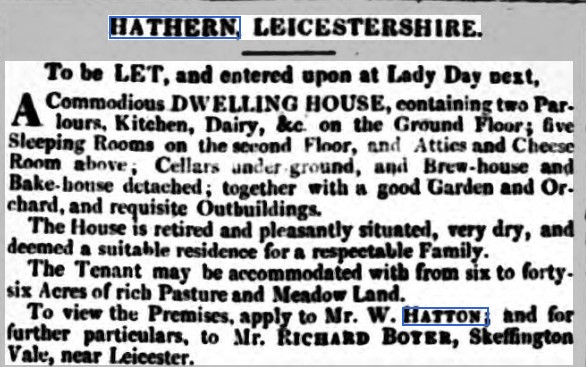 In 1842 William won prizes in a local show for best heifer and best long-wooled sheep. Therafter William and Sarah moved to Stanford on Soar (source 1851 census). On an Ancestry message board his death is recorded in Stanford-on-Soar on July 11th 1857 (but see NOTE below). Sarah died in 1881. 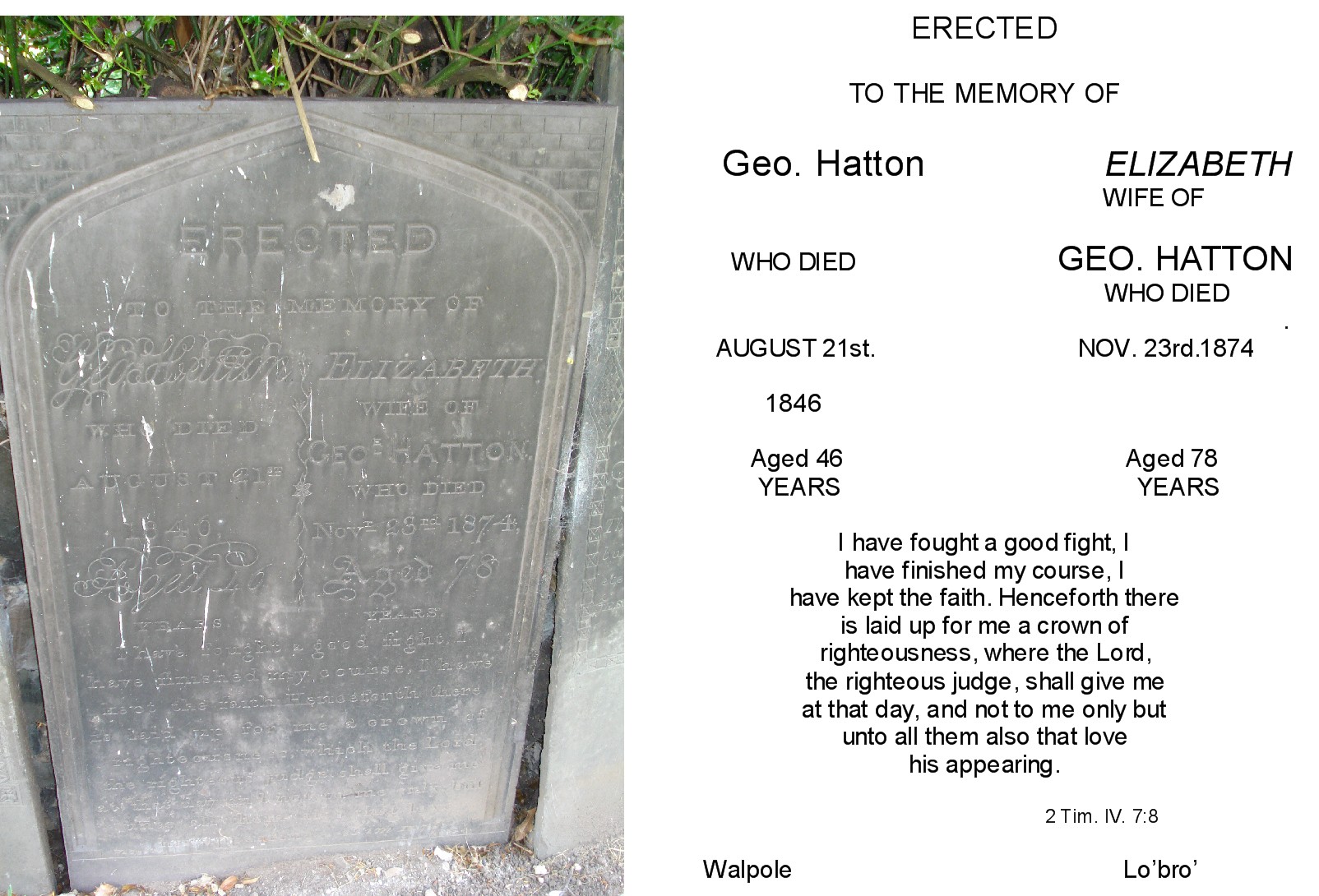 The family of younger brother George Henry Hatton born in 1811 had more impact on Hathern. George and Elizabeth settled in Hathern and had five children in the seven years leading up to 1841. During that time George was a labourer and a draper but by the 1841 census was a farmer and cattle dealer. Unfortunately he was taken ill with typhus and died in 1846 and his widow Elizabeth Hatton took over the at the helm and over the next thirty years brought up the children whilst farming forty acres with the help of one farm worker and a servant. In 1861 she was awarded £17 by the Notts and Derbyshire Fire Insurance Office for the death of a valuable filly killed by lightning. Although the address of the farm is shown in the census as Church Street in 1851 and Green Hill in 1861 this seems to be the same place i.e. Green Hill farm. Elizabeth died in 1874 and picture is of the gravestone shared with her late husband in Hathern churchyard. Two of their children continued to live in the village and carried on the connection to agriculture. 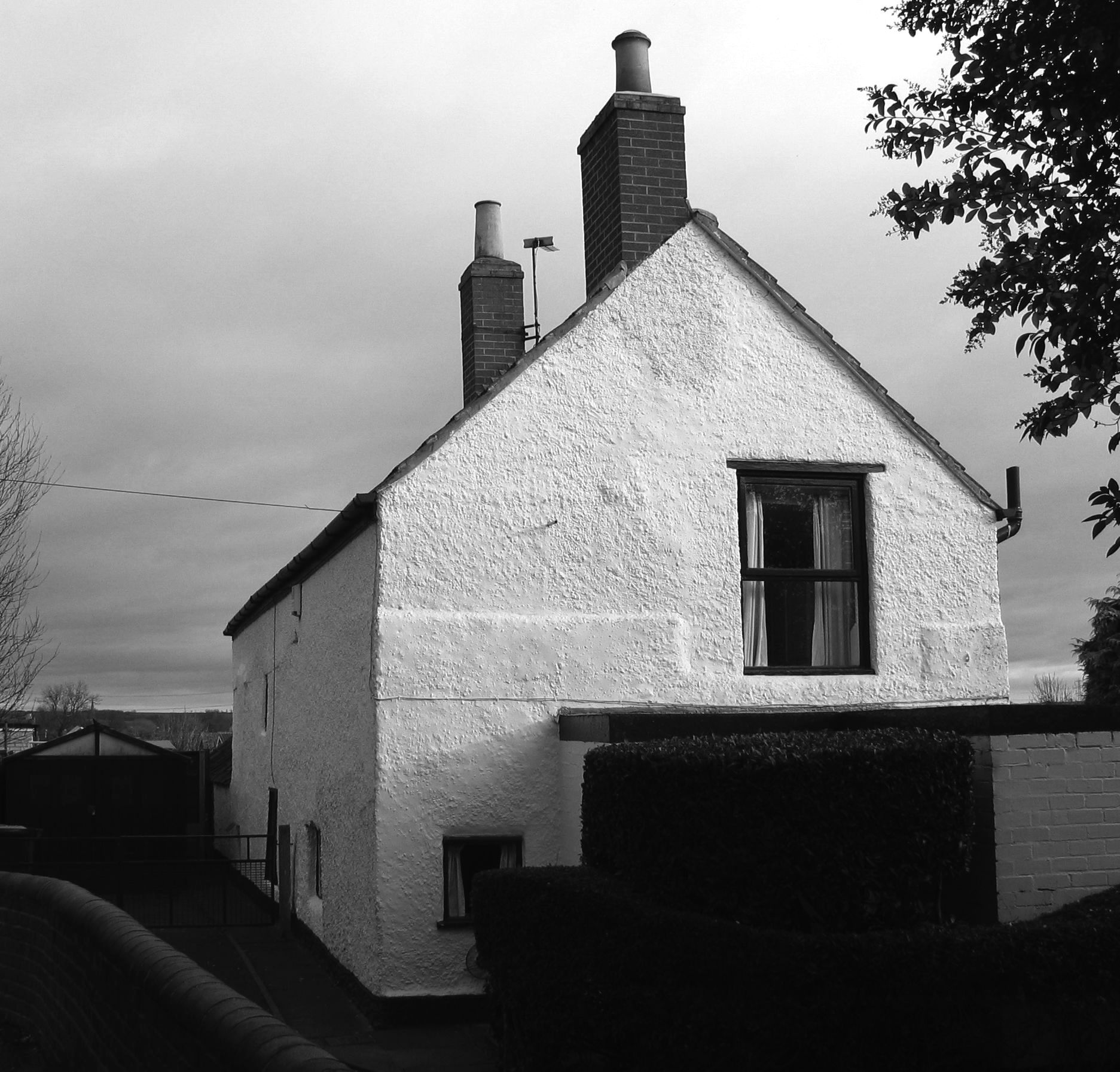 The eldest of these was William Hatton (1831-1931). By 1861, now a cattle dealer, he had married Elizabeth a dressmaker from Sutton Bonnington and was raising a family in Dovecote Street. In 1862 following bankruptcy William's estate and effects were distributed to his creditors. However in 1866 he and William Swift were appointed parish constables. In 1871 William took court action to reclaim the costs of purchasing cows that were ill at time of purchase and one year later was appointed overseer for Hathern with Benjamin Fuller. In 1873 typhus struck again with the death of his son George H. aged only fourteen. The couple moved to the Leys and in 1881 William a grazier lived there with Elizabeth and four children including Henry (grazier son see footnote below) and daughter Elizabeth (dressmaker like her mother). In 1891 William was the most seriously injured when a trap oveturned whilst careering down Shepshed Road, one of several such incidents. After Elizabeth died, William remarried in 1893 to Julia from Borden in Kent who was 15 years his junior. Two years later William ('butcher of Hathern') was mentioned in a newpaper report of a fracas with gypsies. 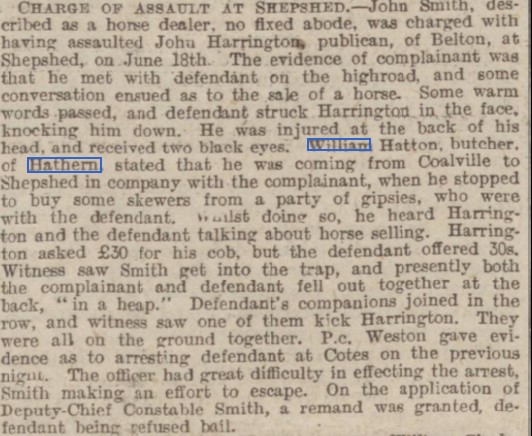 In 1898 William sold fifty breeding sheep at Nottingham Goose Fair.  One year later three lots of land farmed by William were put up for auction. This comprised eight acres on the Loughborough to Derby Turnpike, meadow along the brook on Zouch Road owned by Christ's College Cambridge and a neighbouring plot owned by the Loughborough Navigation Company. In 1911 retired farmer William and Julia were still together in The Leys, and in a 1921 news article William Hatton aged ninety of Leys Farm was declared Hathern's oldest resident.  In that same year William died and his obituary stated 'Fifty years ago he was involved in an extensive cattle business and was well known in counties of Leicestershire, Derbyshire and Nottinghamshire. He leaves a widow and four children'.

William's brother born in Hathern in 1839 was called Henry George Laban Hatton. By 1871 he was a farmer of 40 acres living with his mother Elizabeth who aged over 70 was still farming a further 14 acres. In 1863 he opened the batting and took three wickets in a cricket match between Henry Hatton's XI and Henry Harriman's XI. In 1869 he won prizes in a local show for his celery, carrots and fruit. The 1870 census did not contain specific addresses but it appears that they now lived in the thatched farmhouse at the top of Pasture Lane from where Henry George continued to farm until his death in 1916. This is where he and wife Caroline Christian from Melton Mowbray raised their son George Percy who was born in 1877. In 1875 some land was sold that was occupied by H.G.L. Hatton - namely Bridge Meadow, Bridge Close and Willow Piece (plantation), a total of six acres on the Loughborough to Derby turnpike. In 1877 one of Henry's cowsheds was declared to be infected with foot and mouth. In the same year both Henry and William Hatton attended the inaugural meeting of the Hathern Conservative Association. A further court action took place in 1884 when H.G.L. Hatton's nephew was charged with trespassing with a dog to chase rabbits. Case was dismissed. In 1890 the Hathern Floral and Horticultural Society held their first flower show in a field in Pasture Lane lent by H.G.L. Hatton. 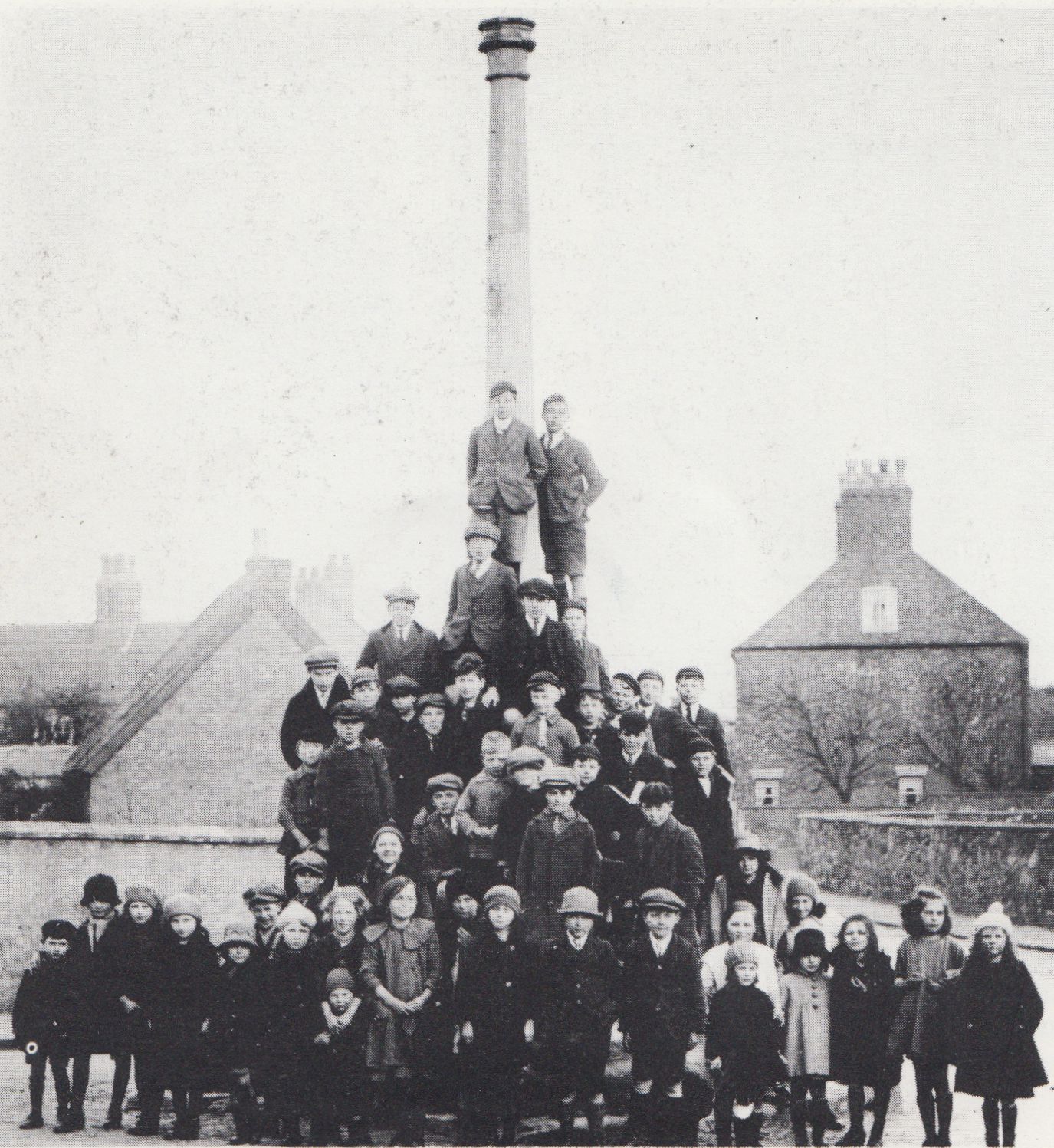 In the census records of 1901 and 1911  son George Percy Hatton is shown to be helping his father to run the farm and in 1916 is described as a grazier. Incidentally just beyond the farmhouse in the picture was a building which in 1911 was the home of the Conservative Club, having previously been a Temperance Hall and more recently was 'Jim's garage'. George Percy Hatton married Alice Chadburn in Loughborough in 1911 and they had three children (source : Ancestry family tree).Over the next few years George was placed on the Parish constables' list and was actively involved as a member of the Parish Council.  In the 1921 electoral roll George and Alice are still in Pasture Lane.  In the same year three Hathern lads were fined half-a-crown for stealing apples from George's orchard - these were Bertram Bowley, Bert Conway and Frank Oxby. Also in the village at that time were desendants of William and Elizabeth who had for a while lived in Sutton Bonnington. On the picture of the Cross one of the young Hattons is third from the left on the front row.

Footnote. The Sutton Bonnington connection. Henry Joseph Hatton born in 1861 to William and Elizabeth went on to live in Sutton Bonnington his mother's birthplace. In the 1920's he moved back to Hathern (Wide Lane) with wife Ada Mary nee ward, maybe to be with son William Eric Hatton and his wife Lilian Daisy nee Brooks who had lived in Golden Square since at least 1919. William and Lily were still together in the 1939 Register (in the Pasture Lane farmhouse - see below) and both lived to a good old age.

One further person details not disclosed.

NOTE : In a newspaper item of May 1852, the sale was announced of farmhouse previously occupied by the late William Hatton and now occupied by his widow. I can only make sense of this by assuming that the report was supposed to relate to the late George Hatton. In 1851 Henry had already moved to Stanford-on-Soar.